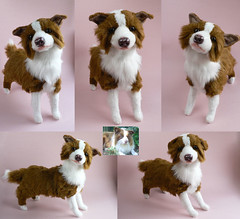 things are moving on as they always do.  And I am going to be shifting over to typepad.  This blog will remain and I will have a link to it especailly as posts will be refered back to as they always are.

So I you want to find me

It looks a little naked as I try and learn my way around it!!

This cat is getting the best of me. It isn't my pattern and the results are truly spectacular when finished. The thing is I forgot to mark some important marks on it and I cut the fur the wrong way. Not disastrous things but enough to sit me back and not want to finish it at present.. So I keep making other things in place of it.

See it is real.

I will get there.

Hey the bird is out of my craft room. He seems to be on the mend as he sits in our family room yelling out the window to his mate and our house bird struts over his cage trying to show him who is boss. The good thing is that means I will be able to try and get into some night rhythm. It has been so interrupted as I had to be quiet for a convalescing bird. I would end up going to sleep.

But now back to the plan. I can hide in my room while he recovers in the family room.

Now this bird in a previous post  this had to have shots because of feared zinc poisoning and now this bacterial infection.  For an aviary bird that seems to be handled only when we are poking and prodding him he is very good.  Not too many bites this time and the bites he does give are only 1/2 hearted.  He is a real character and love him to bits.  I may try making a conure soon.

Well I managed to make a dress today. Simplicity 5531.  It is am easy pattern and for those who can sew I would say an hour to make it including the cutting out.  It took  me 3 or 4 LOL.
It ties at the neck and is also elasticised along the back.  I think she likes it but she is annoyed at me today so I am unsure ROFL.

ANd my hands?  Well my hands smell like phosphourous.  Actually burnt match phosphorous.  It does it every so often but I have no idea why.  This is the third day.  LAst time it lasted a few months.  Has anyone else had this happen to them or something similar?  I am really curious.

I also went thifting today.  I dont go very often but today was a bonanza for me

Aren't the and  fabrics great. Bears, babies, bunnies and a table cloth.  I'm really stoked with my finds.  Now what am I going to do with it all?  I don't know but I am sure it will come to me.

The Birth Order Predictor
And this got me wrong.  i am the baby of the family but there were 6 years between my brother and myself and my sister was even older.  So who knows.

Well the sleeping fell over on the weekend simply because kids and hubby were around. everytime I went to lie down I would be summoned.
And now although getting ack into the swing of it again I can't be as busy at night as I wanted to be.
Why is this so? at present I have my sun conure residing o my sewing desk in my craft room. He became unwell and spent last night at the vets. tonight he is home but due to his special needs I have to relinquish my room.
He is well worth it but can't tidy or move around too mch as he needs to sleep and heal.
So for the next week I will choose things to hand sew. the cat although cut out has been put off for too long. I have no more excuses and tomorow the sewig will begin.

I may even try to slip another mini in at the end of the week to bring me back up to schedule.

Stuffed with Polyfill and weighted with fine sand to sharpen those pins and needles she really is a handy little lady to have a round.

Midge is 5cm (2.5inches) stting. She is unable to stand as one leg is bent and the other leg is stretched out and toe pointed

She looks sweet with either leg swinging.

Midge has bent arms as well and is string jointed.

And here is my apron. My first apron and some lessons were learned, still quite proud of it. The material is quite dark but it is green. So why did I need this apron? Am I a messy cook? Do I drool? No. I needed this apron to try and stop bear fur getting all over my clothes. If someone comes to the door while I am dealing with my bears I am covered in fluff. Not a great look.
I may even try a bit of embroidery on it.... Maybe.

Well the sleeping hasn't been too bad.  A bit harder on the weekend I have discovered but I am maintaining it the best I can during kids and the like.
I am not 100% sure whether I have adjusted or not to be honest.  I feel a little better and I don't mind the naps but I didn't hit the brick wall that everyone seems to complain about.
Like I said though the way I was sleeping ANYTHING had to be an improvement so maybe that is why I am not finding it so bad at present.
Their have been a few upsides to this way of sleeping.
The house has never been tidier.  I mean I can't vacuum and that at night but man the amount of tidying I can do is mind boggling.  I have been moving more and surely that has to be a good thing.  I still haven't set a timetable.  I am thinking it won't work the same as before.  I think I will just work in blocks.  I am sure I will figure it out.
I really like the quiet time as well.  No one nagging or pulling at me,  No feeling guilty that I should be doing..... whatever it is.  This is my time and I can do whatever I wish.  The tidying won't be a cotinual thing it is just to keep me awake while I adjust. It's pretty good.  Hmm now I have to find my camera and take some pictures of the cool things I  have received.

last night I had a revolting nights sleep.  went down late couldn't relax and so felt awful this morning.  So I decided there and then to start my new sleeping routine.  i changed times around to better suit the family and so that kyle didn't think I was having an affair (yeah right like I have time for that.)
So I took a few naps today and found it surprisingly easy to drop off (lack of sleep will do that to you though)
When I awoke I felt pretty good actually.  That was a surprise in itself.  I was expecting to be groggy or come out of it hard.  I didn't.
But then again we will see how  feel in a few days.  So welcome to Thusrnight.

When reading about doing this it advises not to do anything to technical at first or anything that requires the brain to function at any high level.
So I thought I should most probably keep moving for the most part.  Let me tell you the lounge is tidier then it has been in a long while.  Dusted everything put away properly or waiting to go into rooms where sleeping bodies are.
Tomorrow, tomorrow i will attack the craft room, that will take more then one night though i would think.
I borrowed some easy reading books so even when I am tiring I can relax a little and read.

Once I get over the icky stage which can take a few weeks I plan to use my nights for writing and bearing (crittering really).  I can spend the days doing things with the girls and the the house chores that need to be done but the nights the nights will be mine.  I will not have the tv going.  i refuse to get sucked into watching tv.  I will use my ipod to play music so that noone is disturbed.  And i will create my world.

in the meantime i will do quiet things and keep the door to or room closed so as not to disturb his highness.  I generally wn't be using this extra time to spend more time surfing the net either.  the net is my biggest downfall and  the Alphasmart is going to come in really handy to keep me on the straight and narrow. once i can figure out how to use it properly.

I have no doubt some of the things i do i will look back on and go what the hell was I thinking but hey that is life and we need to explore things for ourselves.  So Friday morning is looking busy I will be tidying the two youngest girls rooms in an effort to keep myself going and i can't do them at night.

Lets have a party albeit a quiet one, celebrating my most recent step into eccentricity

In the past few months I have been bombarded with people I know and care about facing the same threat.  the big C.
That is right the big scary cancer.
I had my third person tell me they are going in.

Then my friends mum.  Went in for a routine checkup and a week later had a total hysterectomy.  She will be fine as well.

Last Thursday another friend found a lump in her throat, she is in for her thyroid to be removed today.  Where the other 2 are optimistic she worries me the most.  She is so sure she is going to die from this.  That it is the worst case scenario.  the drs have told her that it isn't the worst type she could have, but she has decided it has spread through her body.
She has to be positive, she calls it realism.  I tell her noi t isn't it is a defeatist attitude.  If I believed everything the drs had told me i would not have my darling number 4 daughter.  I was told she shouldn't be brought to term.  I was told her limbs would be deformed and she would have no chance of survial as her lungs wwouldn't be developed.  i as told she would be blind,deaf an brain damaged.

Well right now her and her sister are playing noisily as She rides her older sisters back yelling yeehah!

You can feel scared I often did but you should decide fine I have been told I have cancer.  They will remove it and I will be fine.  I will l have caught it in time and I will be ok.

please send your prayers and healing thoughts to these people.  They need all the positives they can get.